The San Martin Palace (ex Anchorena Place) is located at 761 Arenales St. in the Retiro neighbourhood, across street from San Martin Square, one of the most beautiful squares in the city. 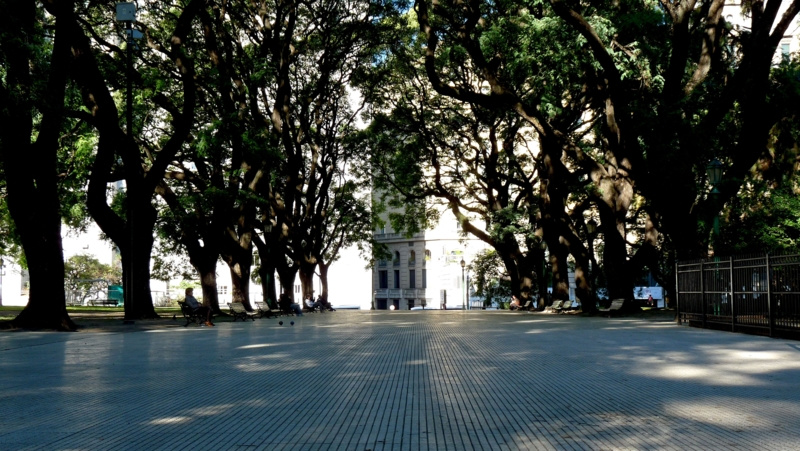 The main attractions of this square are its ageing trees (Palo Borrachos, Jacarandas, Magnolias and Gomeros) and the classical-style buildings that surround the square, which were built mainly during the first decade of the twentieth century. 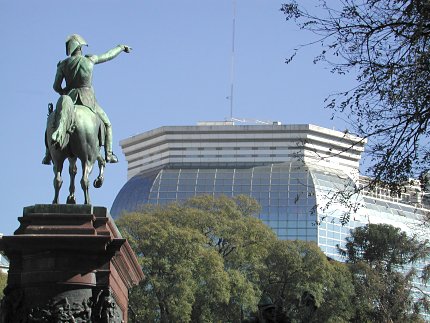 The square main monument is in honour to General San Martín (1778-1850). Built in 1862 by the French sculptor Louis-Joseph Daumas, it is the oldest equestrian statue in Argentina. His right arm points to the Andes mountain range, part of the route of his quest towards the continent independance.

San Martin Square location greatly changed over the last four centuries. During the late 17th century this part of the city was known as “El Retiro”  due to a monastry community. In 1800 the second and last Bullring in Buenos Aires was built there which remained in use until the Bullfighting ban in 1819. Later, it became the lodging of the Cavalry Regiment of General San Martín until late 19th century, when the current scenery of the square and its surroundings began to take shape. 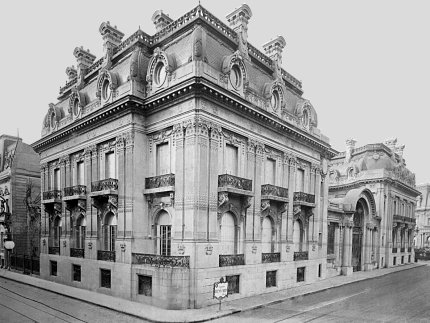 The Anchorena Palace was built between 1905 and 1909 by Architect Alejandro Christophersen, ordered by Mercedes Castellanos de Anchorena.

It is an exponent of L’ Ecole des Beaux Arts. It was based on the project “Hotel a París pour un riche Banquier”, which in 1866 earned Jean Louis Pascal (Christophersen’s teacher) the “Grand Prix de Rome” award, the most prestigious of its time in architecture.

The winter garden, located at the side of the building (on Basavilbaso St.), shows the excellent metal working of the building, made by the Zamboni workshop in Buenos Aires. The main yard, which is oval shaped, encloses a well proportioned space and accomplished composition, consisting on a gallery with Doric columns, ample staircases, curved interior fronts and mansards, and two cupolas.

While at first glance it seems to be one complex, it is actually composed by three residencies: one on Esmeralda St., which was inhabited by Mercedes Castellanos de Anchorena and her son Aaron, a centre one where Enrique Anchorena and his family resided, and the third on Basavilbaso St., where Leonor Uriburu (widow of Emilio Anchorena) lived.

The interior distribution of the residencies is standard for buildings of this kind: storage rooms, male-servant installations and dependencies  in the basement, reception rooms at ground level, private rooms on the first floor, and on the second floor (mansards) the female-servant dependencies, washing and clothing storage rooms.

This building hosted many important social gatherings, such as the gala commemorating the centenary of the Argentinian Independence Proclamation in 1916.

In 1936 the Anchorena Palace was bought by the state to lodge the Ministry of Foreign Affairs and it became known as Palacio San Martín. Currently it serves as the ceremonial site of the Ministry, whose offices were moved to a new location in Arenales St. and Esmeralda St. (across the street to the west), built by the architects Aizenstat and Rajlin.

San Martín Palace was declared a National Historic Monument. It houses inside works of art made by Argentinian and American artists of the 20th century such as Antonio Berni, Pablo Curatella Manes, Lino Enea Spilimbergo, Roberto Matta. Also, the Ministry collection of pre-Columbian art resides here, with ceramics, stone and metal works made by the original habitants from the north-west of Argentina, and a library specialized in international law and international relations history.

Interior photo of the Palace

This building constitutes a valuable landmark of the level achieved by the classical French architecture and the adaptation of 18th century French residencies to local preferences.